A Matter of the Heart. Not an Affair, but for Life.

White-hot bursts of flame flash in the night as the “Stardust” lifts off in the midst of a pillar of fire, leaving the earth behind. Its destination is the moon. Chief pilot and leader of the expedition of the “Stardust” is a major from the US Space Force. His name: PERRY RHODAN!

Thus begins the ongoing story of PERRY RHODAN in volume 1 of the paperback novel series first published fifty years ago on 8 September 1961. Eight years later, with the first moon landing, this science fiction story became a fascinating reality. It has substantially changed our understanding of the world and outer space, and has set in motion an exploration of the universe that transports us today on a scientific basis into imaginary worlds that would have been called pure science fiction fifty years ago. 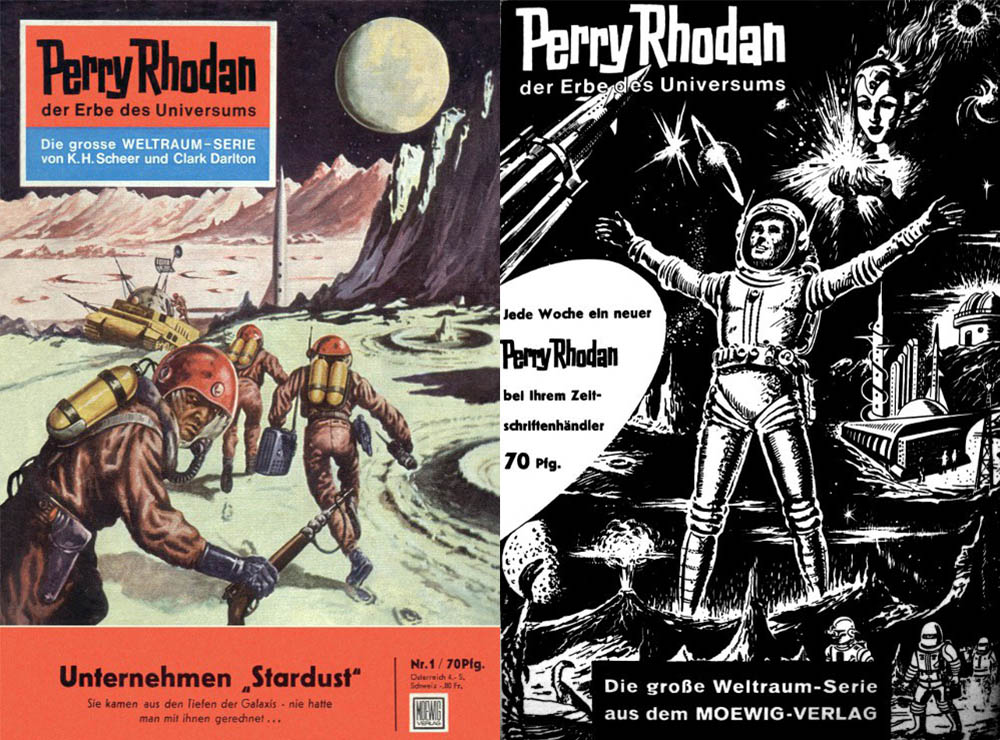 “Let’s take a journey through time and go back to the year 1960. Damage from World War Two is still present everywhere. There are only a few cars driving on the streets and plenty of parking spaces in the cities. Telephones, on the other hand, are only rarely to be found, one in each household in the cities at best; in rural areas people only make phone calls from the post office. Televisions are not yet to be found in every household either. People gather to watch television at relatives’ homes or in pubs, or they stand in front of shop windows, where the only television program is running.” Into this gray era, a few people in Germany toss the wild idea of a truly visionary science fiction novel series.

What especially impresses me is the overwhelming vitality that grows out of enthusiasm for an idea, as long as you truly believe in this idea. Thus something was made possible here that hardly anyone could have imagined in 1961: a new paperback novel from the PERRY RHODAN series has actually been published week for week for fifty years now, meanwhile in parallel in multiple editions around the world.

Millions of people in different countries read these novels, get involved in scientific and technical issues and questions of content in their reader comments, challenge the authors. Most of all, though, they look forward to the continuation of the story every week and enjoy it tremendously. In the course of the project work, I have been surprised that several prestigious scientists have turned out to be Perry Rhodan readers, after I told them that Perry Rhodan was a fixed element in OUBEY’s regular reading for more than thirty years. And then their eyes lit up with the enthusiasm that has inhered to this idea from the very beginning. The chief author Robert Feldhoff, who sadly died much too young, once said: “Perry Rhodan is a matter of the heart. Not an affair, but for life.”