The brilliant film director Stanley Kubrick was convinced that every one of us has a “twin” in this world – perhaps even several. People whose spirits and souls are related and intimately connected even when they don’t know one another and will never actually meet. Such connections are of a purely spiritual nature which is why they defy not just geographical distance but separation over centuries of time itself. Whether these twins will ever discover, recognize or even find one another is something that can never be planned for. It simply happens or it doesn’t.

Kubrick wasn’t only one of the film directors OUBEY most warmly admired: his idea of “twined existences” also deeply fascinated him. So it was only natural that at some point I should ask myself whether OUBEY could have had his own twin in this world and if so who this twin could have been. And in pondering this question two names always came to the forefront and interestingly enough, both are musicians. One of them died a couple of hundred years ago, young, famous and yet a pauper. The other is a man of our own age, even though he gave one of his first solo albums the title “I Just Wasn´t Made for These Times”: Brian Wilson – a melody-maker, composer, arranger, musician and song writer of genius, and also the co-lead vocalist and de facto leader of the Beach Boys. Today’s blog is dedicated to him and the spiritual affinity that I see between him and OUBEY. Now I am well aware that some people might regard my drawing such a comparison as strange, far-fetched, absurd or even downright presumptuous. Yet I still want to make it. And I have my reasons for doing so.

The germ of the idea was born over twenty five years ago, triggered by OUBEYs reaction to a documentary about the Beach Boys in which the story of Brian Wilson figured largely. The way had been prepared by OUBEYs late discovery of his music and its incredible richness. What lay behind the seemingly superficial “Surf- Dance-Fun” sound of the songs was a revelation. OUBEY became completely absorbed in the music, constantly amazed by the sheer genius of what Brian Wilson had created, and deeply moved by his personal life story. What must be the most personal song that Brian Wilson ever wrote and published is entitled “’Til I Die“. It’s the only song for which Brian Wilson himself wrote the lyrics. OUBEY was so moved by the song that he dedicated a drawing to it.

Even today the Pet Sounds album from 1966, which Wilson composed and orchestrated himself while the band was touring with their old songs, is still cited as one of the all-time greats of pop music. He didn’t want to go on tour with the rest of the band, he didn’t want to go on stage. He wanted to realise what was going on in his head and, much more than that, what was moving in the spirit of the times. It‘s extraordinary how consummately well he succeeded in turning what up to then had only existed and vibrated in the inner world of his mind into music that each of us can hear and experience. Some tracks consist of twelve musical sections each of which makes its own contribution to the brilliant architecture of the harmonics, including numerous polyphonic sections. Equally extraordinary was the way in which he succeeded in fighting down all the opposition he encountered, in gaining the services of an orchestra of top musicians for the project, and finally in persuading the Beach Boys, now returned from their tour, to add their voices to the album – despite all their misgivings that the album would prove a flop. And as it turned out on its initial release Pet Sounds was no runaway success like the previous albums of the Beach Boys. A man as stubborn and strong as he was sensitive and vulnerable. He was ahead of his time. A maverick whose transgression of frontiers not only nearly robbed him of his reason but nearly cost him his life. “God Only Knows“ is one of his masterworks on this album.

There is a very marked kinship between what OUBEY working alone on his art expressed of the complexity and harmony of the universe in his multi-layered paintings and what Brian Wilson brought to fruition in his musical compositions and arrangement. Free spirits who understand, see and hear more in their own minds than all others, who are committed to bringing this to expression, in their own particular ways as best they can. People who encounter OUBEYs paintings often speak of tone paintings that they not only can see but hear. Perhaps these two men really are twins in the sense that Stanley Kubrick intended. 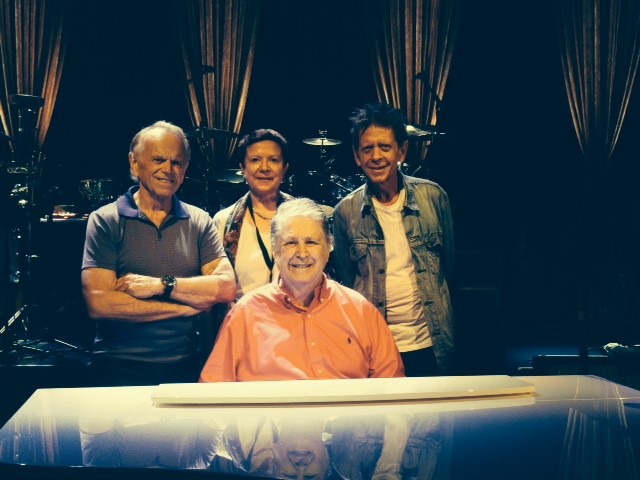 One year ago when I had the opportunity and the privilege of meeting Brian Wilson personally before his concert and exchanging a few insights and ideas with him, it became clear to me that there really was a special affinity at work here – through me travelling back to OUBEY. And I also know that Brian Wilson recognized this affinity at that moment. It was a hallowed moment for which I shall always be grateful. In the concert that followed, together with the ten exceptional musicians and singers who accompanied him, he succeeded in delivering a live performance of the entire Pet Sounds album that was every bit as good as the original technology-assisted studio recording.

PS: At the end of last year when I was searching around for a totally new concept for the internet launch of the MINDKISS Project, I had a particular “harmonic triad” very much in mind. To show the others in the team what I had in mind and what my general idea was, I used two videos which documented how the song “Good Vibrations” came to be written and produced – a track that narrowly missed being included in the Pet Sounds album but which turned out to be a smash hit.

My analogy went like this: OUBEYs artwork gives the base tone, the core and the basic rhythm. Over this comes the filigree instrumental sounds and harmonies of the MINDKISS Project. And finally we now can hear, for the first time in many years, the polyphonic sound of human voices, my own included. To my great joy everybody immediately understood what I was talking about.

If you would like to follow the story of how “Good Vibrations” came to be created in these two documentary videos, here are the links:

In the Magic of Complexity

“The aim of my art is definitely not to prune the high complexity of reality down to some underlying elementary order but to preserve the bloom of magic cast by the world in all its complexity and uncontrollability. And to try to encounter this with something that matches this bloom of magic. Because nature itself is an art work.”