Life is Short as a Pair of Swimming Trunks

Three weeks ago, “between the years”, as I was once again dipping into the shelves of our collected world of books, I spontaneously reached out for two picture books. They lay across the other neatly lined up books which was very much in character with the artist whose work they contained. Herbert Achternbusch.

Immediately I immersed myself anew in “Die Föhnforscher” for the umpteenth time. I had bought the book together with the catalogue of the first and only exhibition of original paintings by the painter Herbert Achternbusch, which I had visited more than 25 years earlier at the Künstlerhaus Bethanien in Berlin. Until then, I didn’t even know that Achternbusch was also a painter, or even that he originally came from painting.

Until then I had only known his films which fascinated me as their superficial banality was in fact just as bizarre as it was profound and shot through with a subversive anarchist strain. Unlike Luis Bunuel’s early films “The Andalusian Dog” and “L’Age d’Or”. Not surrealism but rather a cinematic shift putting what we know as reality on a level where its normality is called into question. In this sense a kindred spirit became palpable for me. It can also be found in OUBEY’s only, as yet unreleased silent film “Gestern unter Wasser/Inside Out” (Yesterday Under Water/Inside Out) from 1984. 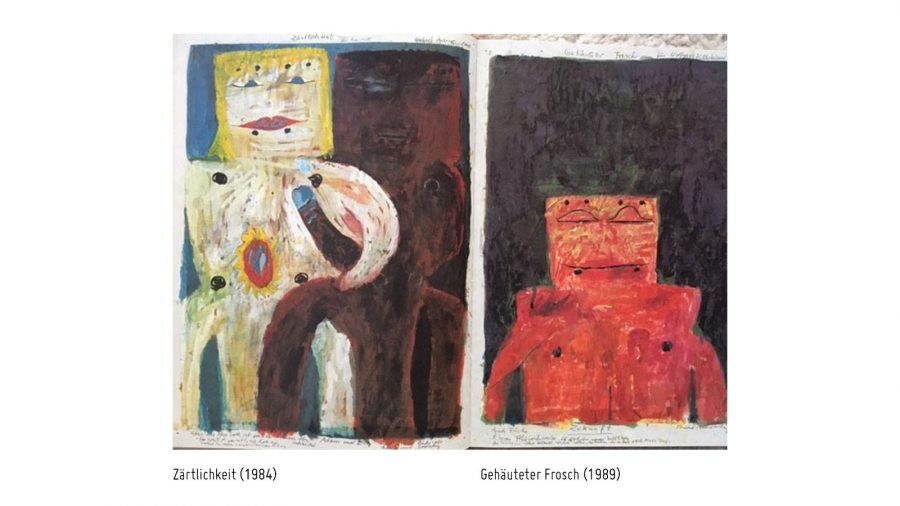 But it was his paintings that I first came across unexpectedly in 1988 in the Künstlerhaus Bethanien that awoke more than enthusiasm for Herbert Achternbusch in me. It was something like love, and this love blossomed immediately again in me as a few weeks ago I sat in my reading chair, lost to time, and wandering through his picture worlds. 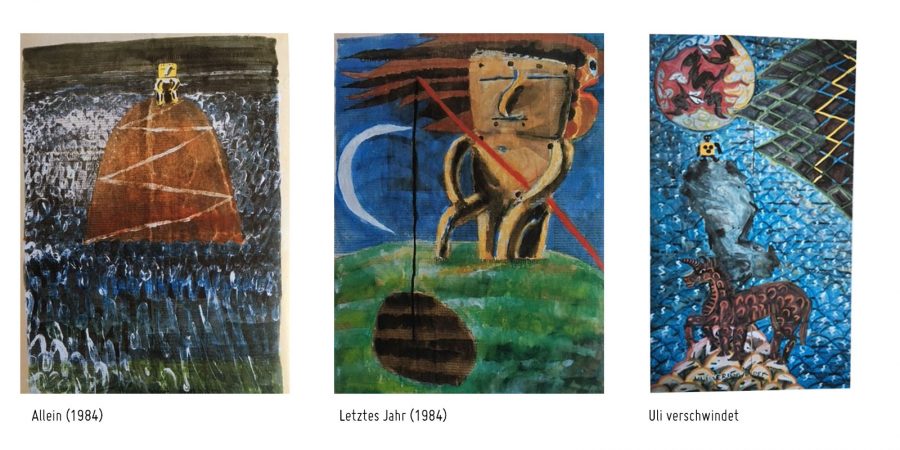 Caught in my emotion, I made a few notes that evening. Maybe I would dare to write an article on one of the few living artists who really mean something to me because they have given me so much with their work which as unconventional as it’s high-class and from which I still benefit today?

Yesterday evening I doubts that my article on the wonderful, indomitable, and yet somehow still loving and loveable anarchist Herbert Achternbusch was good enough to be published here. Yesterday evening, however, he went before us, the living, on the way that we all must take eventually.

Today the papers are full of obituaries. Obituaries are not my thing. But after this unexpected, marvellous, intense and very personal re-encounter with him, I’ve completely rewritten the article for him, for myself, and also for OUBEY and shall publish it just as it is. With a deep bow, great thanks, and a lot of love in my heart.

In case you’re wondering about the title of this post, it’s Achternbusch’s opening quote in his book “Die Föhnforscher”.

A Poem in Close Up

“I like the idea of my paintings travelling”, OUBEY once said. “I hope they would fascinate an original inhabitant of South America just as much as an Inuit or native New Yorker.”

Times of uncertainty like those we’ve been going through in the past weeks and months and that are set to last for a very long time across the whole world call for all our skills and abilities, all our strengths and all our senses. A state of extreme emergency such as the world has long not seen. Dynamic complexity in full flight. And what’s at stake here is nothing less than what we have always held to be most dear in our lives – life itself.